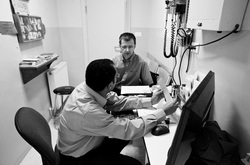 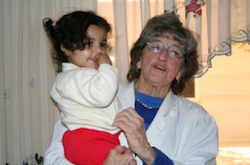 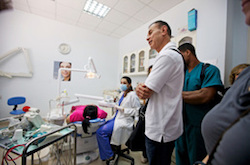 Background
The Annoor Sanatorium is a hospital dedicated to serving those with little of this world’s goods who suffer from chronic lung disease.  It began in 1965 when a doctor and a nurse/midwife were called by the Lord to convert a rented modest two-story home in northern Jordan into a 16-bed hospital for Bedouin nomads sick with tuberculosis.  They had particular compassion for the Bedouin people because their nomadic lifestyle often prevented a complete recovery from this chronic disease.  So the simple labor of love began with a dedication to serving God and a commitment to healing men, women, and children in body, mind and spirit.  Annoor means “The Light", in honor of the Light of the World.  In 1973, the sanatorium expanded into a 50-bed facility. The hospital is located on a 25-acre plot of land in the desert, a few kilometers outside the town of Mafraq.  In God’s providence, Annoor Sanatorium management was able to drill two deep wells.  These wells provide water for the hospital and surrounding olive orchards, creating a pleasant environment conducive to recuperation.

Staff/Activities
The hospital specifically reaches out to chronically ill patients, complementing local medical facilities which are primarily designed to accommodate mainly short-term admissions. Annoor Sanatorium chooses to minister to those who need rest, rather than perform elaborate (and hence expensive and time-consuming) medical evaluations, which are available elsewhere in Jordan. The sanatorium does not admit patients who are unwilling to come in for less than a month, and some patients have needed to stay for as long as 8 months in order to complete their Intensive Phase treatment. This way, strong and deep bonds of love and care are built because of the time spent together.

The original goal of the sanatorium was to meet the needs of the under-served Bedouin tribes. With time, the sanatorium has grown to include a much larger patient base. It currently serves patients from Jordan, Palestine, Syria, Saudi Arabia, Sudan, Egypt, Lebanon, Yemen, and increasingly from Iraq.

There are only token charges for outpatient services and hospitalization. If patients can afford it, only a minimal cost is required for inpatient services. All TB patients are treated free of cost. Annoor Sanatorium is registered in the country as a charitable organization, providing inexpensive medical care for low-income patients.

Future Plans
The Annoor Sanatorium’s vision is to see the ministry continue as a channel to demonstrate the grace of Christ to Bedouin tribes from the deserts of Jordan as well as thousands of Arabs from Jordan and surrounding countries.

Background
In 1991 an opportunity opened up to convert an unused government rest house into a branch clinic of the Annoor Sanatorium in Ras-An-Naqb.  “Ras-An-Naqb” means “Head of the Negev” and, overlooking the wilderness of southern Jordan, Ras-An-Naqb is home to many Bedouin people.  Patients often come from impoverished families and many are illiterate. In order to reach this isolated population, the doctor who initiated this project sought to establish an outpatient clinic branch of the sanatorium in this location.

Staff/Activities
Patients often come from distant locations such as Aqaba, Kerak, towns of the Jordan Valley along the Dead Sea, and Eastern Saudi Arabia.  The clinic focuses on chest diseases and is equipped with basic diagnostic tools that allow treatment of the most frequently seen illnesses.

Background
Hope Clinic was founded in 1991 in the basement of a local Bible-believing church in Amman.  The ministry began when the need to offer medical attention to Iraqi refugees from the Gulf War became evident.  At the time, the basement clinic was exclusively visited by Iraqi refugees and members of the church congregation.  In 1998, a ministry team of medical workers began serving at Hope Clinic and the clinic slowly expanded its patient base.  It began seeing patients from outside the church fellowship, including Jordanians, Palestinians, Egyptians, Yemenis, Sudanese, Somalis, Ethiopians, and other Northern Africans.

Staff/Activities
The clinic only offers outpatient services in general family practice and sees approximately 3600 outpatient visits a year. The staff at Hope Clinic actively shares with the patients the reason behind their free services and compassionate attitudes.  Additionally, there are several community programs offered in partnership through the Bible-believing church next door.  The programs offer English courses, food coupon distributions and blanket and portable heater distributions in the winter as funding becomes available.

Future Plans
Hope Clinic plans to continue offering the same quality of care and medical support to their current patients and new ones that come their way. In addition, the clinic is also working towards expanding its services by adding dentistry and short-term opportunities for physicians from a variety of specialties.

Background
Zarka Baptist Clinic was founded in 2007 by initial funding from the Jordanian Baptist Church Association to a few families from Zarka Baptist Church who had a passion for Jesus and for the people of their community – Zarka, Jordan. The need was and still is, glaringly obvious: 65 percent of the residents of Zarka live below the poverty level.  Families of Zarka struggle on a daily basis to obtain enough food, a proper education for their children and medical care for their sick. In response to these living conditions, the people of the Zarka Baptist Ministry heeded Christ’s call to begin the Zarka Baptist Clinic in order to reach out with God's healing hand and treat those in the community who would otherwise have not been able to afford medical care.

Staff/Activities
The clinic provides excellent medical/dental outpatient services at a minimal to sometimes free cost.  Free health screenings for blood pressure/blood sugar are available for anyone in the community.  All of the medical staff are Bible-believing healthcare workers that are not only serving the Zarka community with their medical expertise but also demonstrating the love of Christ to all people. Spiritual literature is available in the waiting room as another way to share Christ with the patients.  The clinic is a part of the Zarka Baptist Church “Good Shepherd Ministry.”  Other services provided by the Good Shepherd Ministry include food distribution, prison outreach, and ESL (English as a Second Language) training courses.

Future Plans
Zarka Baptist Clinic hopes to increase awareness in the surrounding community of the quality medical care offered by its facilities.  It plans to expand its medical outreach days by partnering with other like-minded churches in the community to create host medical and visitation teams responsible for reaching out to the neediest areas in Zarka.  Furthermore, the clinic is working to expand its services by adding short-term opportunities for physicians from a variety of specialties.